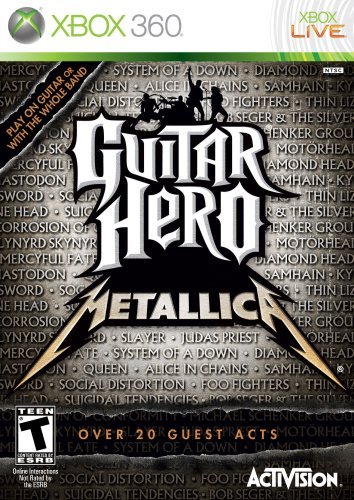 Rating: Teen
Genre: Musical
Overview
Guitar Hero Metallica is for die hard Metallica fans. Players take the band on tour, playing venues showcasing 28 classic Metallica songs. Players will also have the ability to learn 21 songs from bands that influenced Metallica's career. Whether musicians are playing alone or with a full 4-person band, each challenge requires skill, coordination and knowing the songs being played. Each venue poses a different challenge, with the ultimate goal being to wow the crows and score big points. Bonuses and unlocks are available when milestones are reached. The higher a gig is rated by the audience, the more money the band makes. This helps the band to travel to new venues, purchase new equipment, upgrade the bus and purchase accessories for band members. Players also have the opportunity to go into the studio and create their own musical masterpieces.
The products below contain affiliate links. We may receive a commission for purchases made through these links.
Advertisement

Game Release Dates is the best source to find out when does Guitar Hero Metallica come out. Dates do change so check back often as the release approaches.
Privacy Policy
Copyright (c) 2021 www.gamereleasedates.net