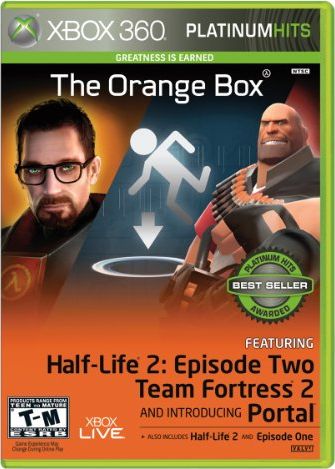 Rating: Mature
Genre: Action, Shooter
Overview
Winner of over 100 awards, The Orange Box is software bundle of essentially three separate games released in 2007. Powered by Valve's ground-breaking Source Engine, Half Life 2 follows the story of Gordon Freeman after his escape from the Black Mesa Facility. Also included is the puzzle game Portal that was recognized as "Puzzle Game of the Year, Best New Character, Funniest Game, and Best New Game Mechanic." If that weren't enough, The Orange Box also brings fierce multiplayer action in Team Fortress 2. With over 9 unique classes and various game modes, the platform has been compelling enough to still be one of the most populated multiplayer FPS platforms 7 years after it's initial release. Each portion of the Box is packed with enough content to stand alone, being bundled makes this game one you cannot miss!
The products below contain affiliate links. We may receive a commission for purchases made through these links.
Advertisement

Game Release Dates is the best source to find out when does The Orange Box come out. Dates do change so check back often as the release approaches.
Privacy Policy
Copyright (c) 2021 www.gamereleasedates.net