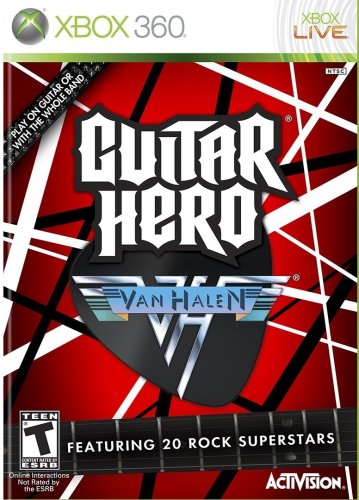 Rating: Teen
Genre: Musical
Overview
Hard-core musical gaming reaches a new magnitude of interactive rock with the release of "Guitar Hero: Van Halen," which features playable avatars of the legendary metal band. The guitar virtuosos are in full force during this intense virtual concert. This roaring title features 25 distinctly edgy Van Halen tunes for players to master! Activision has defined the genre of music games, and this title represents Neversoft's continued ascent in the jamming medium. Anyone can experience the rush of playing Eddie Van Halen's scorching solos, and enthusiastic singers can take the helm in the role of David Lee Roth. The multiplayer insanity is uproariously rapid, and every note counts as the pace just keeps getting quicker. With an iconic soundtrack that showcases the pinnacle of their classic sound, this explosive release is certain to delight all fans of rock and roll.
The products below contain affiliate links. We may receive a commission for purchases made through these links.
Advertisement

Game Release Dates is the best source to find out when does Guitar Hero Van Halen come out. Dates do change so check back often as the release approaches.
Privacy Policy
Copyright (c) 2021 www.gamereleasedates.net