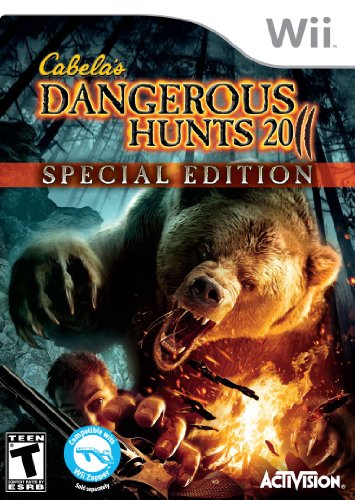 Rating: Teen
Genre: Outdoors
Overview
There's more to this first-person hunting shooter than aiming, clicking and bagging a trophy. The game presents a story, and a series of puzzles and secrets for the gamer to solve and discover. At any turn, the hunter can become the hunted and quickly find himself taking part in a suspenseful life-or-death battle of skill and fast reflexes. Cabela's Dangerous Hunts is Wii-compatible, and also works with the Top Shot Elite, a peripheral that is available separately. The game's bright and detailed graphics bring a wide variety of dangerous game to life; shooting galleries allow you to hone your skills and multiplayer options bring other gamers into the fray, either as companions or competitors.
The products below contain affiliate links. We may receive a commission for purchases made through these links.
Advertisement

Game Release Dates is the best source to find out when does Cabela's Dangerous Hunts 2011 Special Edition come out. Dates do change so check back often as the release approaches.
Privacy Policy
Copyright (c) 2022 www.gamereleasedates.net