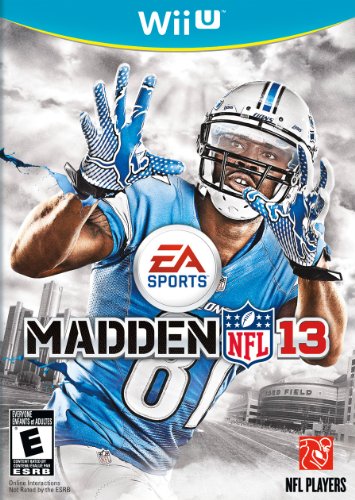 Rating: Everyone 10+
Genre: Sports
Overview
From the preseason to the Super Bowl, Madden 13 is the unrivaled leader for gamers that cannot get enough NFL action. With incredibly smooth gameplay and unparalleled computer intelligence, Madden 13 will provide hours of entertainment all season long. Realilistic team playbooks, player attributes and stadium details make it feel as if you are calling the plays for your favorite team without even leaving your couch! Madden has been the game of choice for football fans for over 25 years. Thanks to exciting juke, spin and burst buttons, this is unlikely to change after Madden 13. If you think you have what it takes to win the big game, prove it! Online mode lets you challenge your friends to intense Madden action for fame and bragging rights. Make the right call and play Madden 13 today!
The products below contain affiliate links. We may receive a commission for purchases made through these links.
Advertisement

Game Release Dates is the best source to find out when does Madden NFL 13 come out. Dates do change so check back often as the release approaches.
Privacy Policy
Copyright (c) 2021 www.gamereleasedates.net