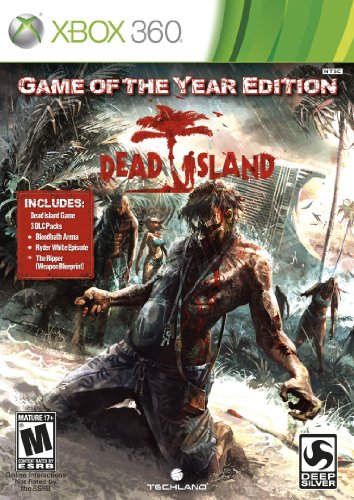 Dead Island Game of the Year

Rating: Mature
Genre: Action
Overview
Set in a beautiful vacation resort on a remote and isolated tropical island, Dead Island plunges players into a sudden and brutal fight for survival when a mysterious epidemic ravages paradise. With immersive first person perspective and an up close and personal melee combat system, Dead Island drops you into a full blown zombie apocalypse with a level of visual detail and intensity that is enhanced by the multiple bug fixes offered in the Game of the Year Edition. This first person melee fighter includes many RPG elements, including experience points to improve your character, collectible weapons, and customizable character options for a personalized experience. Dead Island also features a seamless multiplayer system that allows players to drop in and out of other games with the ability to continue on alone at any time.
The products below contain affiliate links. We may receive a commission for purchases made through these links.
Advertisement

Game Release Dates is the best source to find out when does Dead Island Game of the Year come out. Dates do change so check back often as the release approaches.
Privacy Policy
Copyright (c) 2021 www.gamereleasedates.net