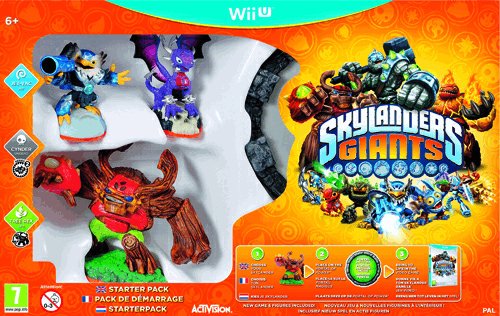 Rating: Everyone 10+
Genre: Adventure
Overview
The Skylanders Giants Starters Kit contains everything new player needs to get going exploring the vast world of Skylands. Similar to the initial entry into the series, players use changeable characters on the Portal of Power to dictate what character is used. Since the kit includes one of the new Giants, players are given a glimpse into the strengths that those particular characters bring to the table. A platforming game at the heart, this title allows players to venture into different worlds to do battle with the evil Kaos to bring peace to Skylands. In exploring the levels to defeat Kaos, players collect treasure that is used to purchase upgrades to existing abilities and unlock new ones. With several different characters available and game modes available, the kit can be expanded to a virtual universe with a ton of different playable characters.
The products below contain affiliate links. We may receive a commission for purchases made through these links.
Advertisement

Game Release Dates is the best source to find out when does Skylanders Giants Starter Kit come out. Dates do change so check back often as the release approaches.
Privacy Policy
Copyright (c) 2022 www.gamereleasedates.net