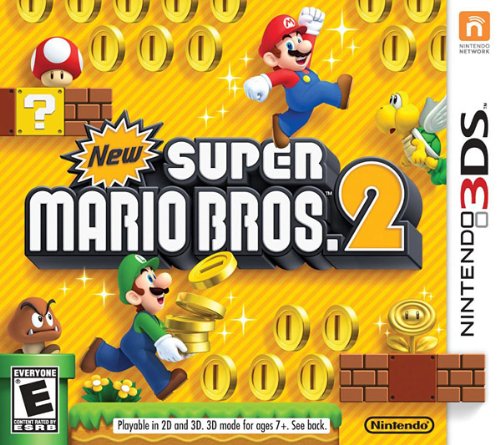 Rating: Everyone
Genre: Action
Overview
New Super Mario Bros. 2 is based on the classic plot that involves Mario rescuing a kidnapped Princess Peach from the evil Bowser. This game uses a traditional two dimensional design with classic platform game play. Mario jumps his way through different platforms, pipes and structures that are of different elevations in a flat world. He must collect gold coins in order to earn prizes and rewards. Mario takes on classic enemies such as Goombas and Koopas as he stumps on them to earn coins and other Golden prizes. Literally, a million coins can be collected throughout all of the missions. Time is also of the essence, as a stop watch gives Mario seconds or minutes to complete different levels. New Super Mario Bros. 2 is compatible with an online multiplayer mode for fun cooperative action through the Mushroom Kingdom.
Advertisement

Game Release Dates is the best source to find out when does New Super Mario Bros. 2 come out. Dates do change so check back often as the release approaches.
Privacy Policy
Copyright (c) 2020 www.gamereleasedates.net