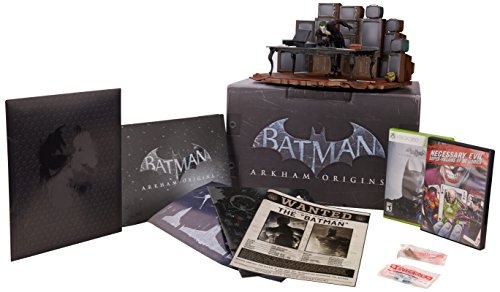 Rating: Teen
Genre: Action
Overview
Batman Arkham Origins offers players the chance to control one of the most popular animated superheroes of all time. This game has an action adventure design that is based on a young Batman character in the traditional Gotham City setting inspired by New York. Batman Arkham Origins features dozens of other classic characters from the popular Batman series. Villains such as Bane and Joker pose the greatest challenge to Batman in this game. Additionally, police captain Gordon and the butler Alfred also make appearances in this game. Batman Arkham Origins includes a classic Vigilante role that surprises the local police force of Gotham City. In this game, Batman has a diverse arsenal of physical abilities that include martial arts rather than firearms and heavy duty machines. A Christmas theme is incorporated into the winter time setting of Batman Arkham Origins.
The products below contain affiliate links. We may receive a commission for purchases made through these links.
Advertisement

Game Release Dates is the best source to find out when does Batman Arkham Origins come out. Dates do change so check back often as the release approaches.
Privacy Policy
Copyright (c) 2021 www.gamereleasedates.net