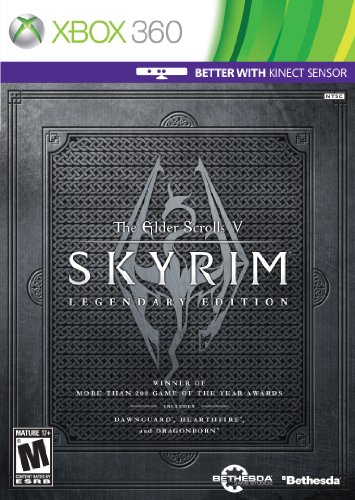 Rating: Mature
Overview
The legendary edition of Skyrim includes the complete original game plus three new downloadable add-ons with original storyline content. Dawnguard, Hearthfire and Dragonborn adds several hours of new gameplay with additional weapons, spells and shouts. Players can mount a dragon and challenge themselves with a new difficulty level: Legendary difficulty mode. Players can choose to side with or retaliate against the Vampire Lord Harkon in the new downloadable content Dawnguard. If players choose to side with the vampire clan, the player can transform into a vampire thereby adding vampire skill sets such as flying and feeding. The Dragonborn DLC(downloadable content)features an additional vast island by the name of Solstheim, which also includes the land of Skyrim. This island includes new enemies, missions and a clash with an old former dragonborn character that possesses the same powers of the original dragonborn character. In the Hearthfire DLC, you can purchase your own land and build
The products below contain affiliate links. We may receive a commission for purchases made through these links.
Advertisement

Game Release Dates is the best source to find out when does The Elder Scrolls V: Skyrim Legendary Edition come out. Dates do change so check back often as the release approaches.
Privacy Policy
Copyright (c) 2021 www.gamereleasedates.net