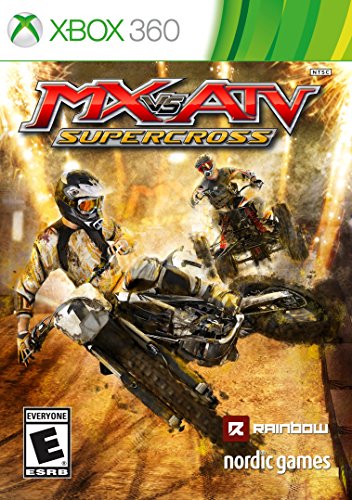 Rating: Everyone
Genre: Racing
Overview
Mx vs. ATV: Supercross brings back most of the popular features from previous games in the Mx vs. ATV franchise. The Supercross edition is based on the traditional competition between motocross bikes and All Terrain Vehicles. The races take place in various settings that are suitable for off road action. Mountains, tropical forests, deserts and the countryside host high speed races. Mx vs. ATV: Supercross features realistic game physics that include aerial moves influenced by simulated gravity effects. For example, the bikes can jump up high when taking off a large hill or cliff. Even the weather conditions in this racing game can influence the outcomes of the races. A classic information screen gives players feedback on the amount of laps remaining and total race time. Energetic rock music is part of the upbeat soundtrack of Mx vs. ATV: Supercross.
The products below contain affiliate links. We may receive a commission for purchases made through these links.
Advertisement

Game Release Dates is the best source to find out when does Mx vs. ATV: Supercross come out. Dates do change so check back often as the release approaches.
Privacy Policy
Copyright (c) 2021 www.gamereleasedates.net