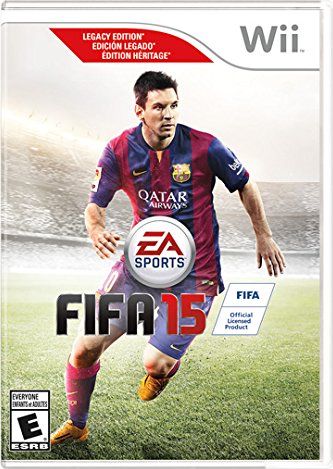 Rating: Everyone
Genre: Sports
Overview
FIFA 15 is part of the most successful soccer video game franchise in history. This title is updated with new features that enhance game play. The traditional Ignite engine once again delivers big time when it comes to realistic simulation of ball physics and kinematics of players. For example, the dribble and trajectory of the soccer ball has never been more accurate. All new player intelligence gives CPU opponents and teammates excellent awareness on the pitch. High quality graphics accurately replicate some of the most recognizable faces in soccer. Even the players gestures and celebrations are precisely shown in FIFA 15. Players can expect to enjoy game play in dozens of worldwide leagues and even take the roles of national teams. Licensed stadiums are thousands of players make FIFA 15 an exciting game for anyone that enjoys the world's most popular sport.
The products below contain affiliate links. We may receive a commission for purchases made through these links.
Advertisement

Game Release Dates is the best source to find out when does FIFA 15 come out. Dates do change so check back often as the release approaches.
Privacy Policy
Copyright (c) 2021 www.gamereleasedates.net