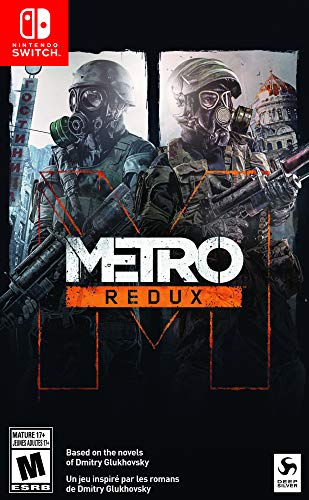 Rating: Mature
Genre: Action, Shooter
Overview
Metro Redux is a first person shooter that is set in futuristic Moscow. Players are invited to experience an apocalyptic Russian city that is on the verge of extinction. Mutants and frightened civilians begin to fight each other with the hope of survival. Players take on the role of Russian fighters that get ready for chaos. Gas masks and an arsenal of deadly weapons are compiled and used when necessary. Two total campaigns pose plenty of challenges in the Russian capital that is on the brink of getting destroyed. There are also ten hours of bonus game play available in addition to the campaigns. Spartan and Survival modes can be selected to complete the challenging missions. An all new 4A engine introduces realistic graphics that include high quality motion pictures which are simulated at an impressive 60 frames per second.
The products below contain affiliate links. We may receive a commission for purchases made through these links.
Advertisement

Game Release Dates is the best source to find out when does Metro Redux come out. Dates do change so check back often as the release approaches.
Privacy Policy
Copyright (c) 2022 www.gamereleasedates.net