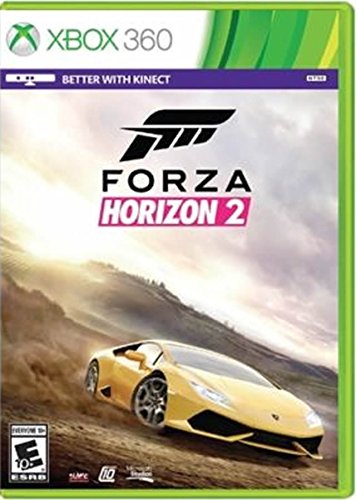 Rating: Everyone 10+
Overview
Forza Horizon 2 challenges players to experience thrilling car racing during the fictional event known as the Horizon Festival. The races are set in southern Europe, primarily in France and Italy. More than 200 different exotic cars are available for selection in Forza Horizon 2. The next generation of high quality graphics deliver 1080p displays for a realistic simulation of racing. Some of the game modes allow drivers to be carefree and reckless by smashing through barns, fences and other structures. There is also the option to challenge airplanes and high speed trains in races. Minute details such as windshield wiping are simulated very accurately during different weather conditions that influence driving conditions. Drivers have a detailed cockpit view that must be used in real time to make sharp turns and maneuvers while cruising through a truly stunning European landscape.
The products below contain affiliate links. We may receive a commission for purchases made through these links.
Advertisement

Forza Horizon 2 for Xbox One
Xbox One Release Date

Game Release Dates is the best source to find out when does Forza Horizon 2 come out. Dates do change so check back often as the release approaches.
Privacy Policy
Copyright (c) 2020 www.gamereleasedates.net