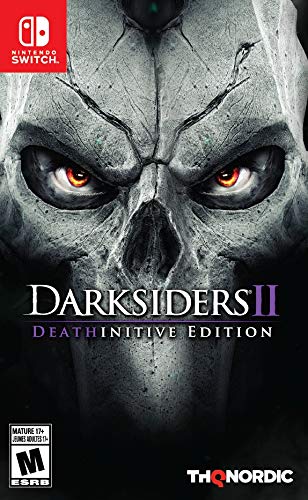 Rating: Mature
Genre: Action, Fighting
Overview
Dungeons, caverns and the underworld best highlight the settings of Darksiders 2: Definitive Edition. The story line is based on the adaptation to the biblical tale of the Four Horsemen of the Apocalypse. Hack-and-slash elements are integrated into the fights of this action/RPG game. Traveling a vast open world is made easy with a horse or by teleporting in select locations. From grotesque demons to beautiful angels, there are plenty of diverse characters that are encountered by the horsemen. Battles with opponents often involve gauntlets and melees that require plenty of composure and discipline. The 3D graphics accurately simulate realistic settings like mountains and weather conditions such as snow fall. Like in most RPG games featuring fights, a power meter provides real time status on each player's stamina.
The products below contain affiliate links. We may receive a commission for purchases made through these links.
Advertisement

Game Release Dates is the best source to find out when does Darksiders 2: Definitive Edition come out. Dates do change so check back often as the release approaches.
Privacy Policy
Copyright (c) 2022 www.gamereleasedates.net