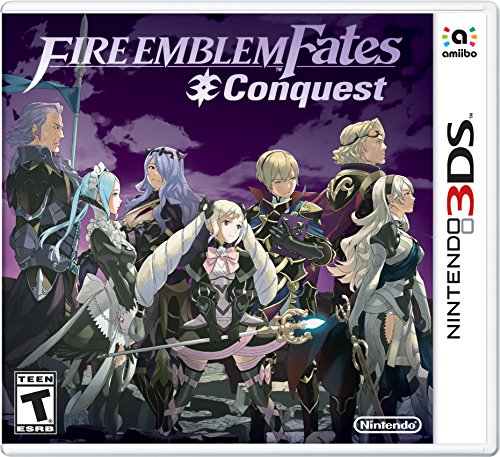 Rating: Teen
Overview
Fire Emblem Fates: Conquest is a tactical role-playing game with a plot that unfolds in the fictional countries of Hoshido and Nohr. The protagonist in this title is created as an avatar with custom features such as age, gender, physique and accessories. The avatar finds himself navigating both kingdoms during times of peace as well as war. Having family in both of the nations, the main character must choose a side and maintain loyalty. The rulers of Hoshido and Nohr have their own armies and other powerful leaders who ultimately make decisions that affect the avatar's fate. Fire Emblem Fates: Conquest has a complicated fighting systems that includes blocking of attacks, trading of weapons and other strategic moves that lead to victories.
The products below contain affiliate links. We may receive a commission for purchases made through these links.
Advertisement

Game Release Dates is the best source to find out when does Fire Emblem Fates: Conquest come out. Dates do change so check back often as the release approaches.
Privacy Policy
Copyright (c) 2021 www.gamereleasedates.net