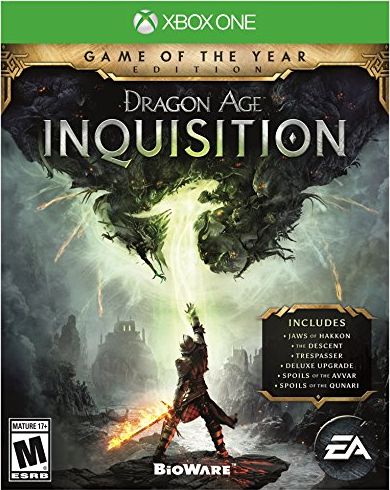 Rating: Mature
Overview
The Breach is allowing demons into Thedas. It's up to the Inquisitor and the Inquisition to prevent a conquering evil from taking over the land in Dragon Age Inquisition (Game of the Year)! Every piece of content publicly released is available with this GOTY Edition. There's a reason that this game won more than 130 awards! Experience the adventure as you customize characters, follow the story, explore Thedas, talk to people, fight enemies and go on side quests. This GOTY Edition includes the game and downloadable content codes for the four-player Dragonslayer Multiplayer expansion pack, the Jaws of Hakkon, The Descent and Trespasser story packs and The Black Emporium, Spoils of the Avvar and Spoils of the Qunari item packs!
The products below contain affiliate links. We may receive a commission for purchases made through these links.
Advertisement

Game Release Dates is the best source to find out when does Dragon Age Inquisition (Game of the Year) come out. Dates do change so check back often as the release approaches.
Privacy Policy
Copyright (c) 2021 www.gamereleasedates.net