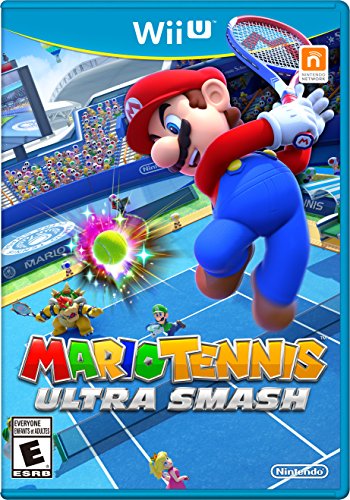 Rating: Everyone
Overview
Compete on a variety of open tennis courts in singles and doubles matches in Mario Tennis: Ultra Smash! Pick a player from a large roster of Super Mario favorites that includes Mario, Luigi, Daisy, Donkey Kong and Yoshi. Show the crowds what you're capable of on nine courts that feature a variety of surfaces that make maneuvering and bouncing difficult. Navigate various challenges on clay, sand, ice, carpet and grass. Use the Morph Court to change your opponent's surface to something more difficult for them! Grab a Mega Mushroom to increase your character's size and check out the new Jumpshot feature to smash the ball. Challenge other players in offline knockout and online doubles partner games with Super Mario amiibos!
The products below contain affiliate links. We may receive a commission for purchases made through these links.
Advertisement

Game Release Dates is the best source to find out when does Mario Tennis: Ultra Smash come out. Dates do change so check back often as the release approaches.
Privacy Policy
Copyright (c) 2022 www.gamereleasedates.net