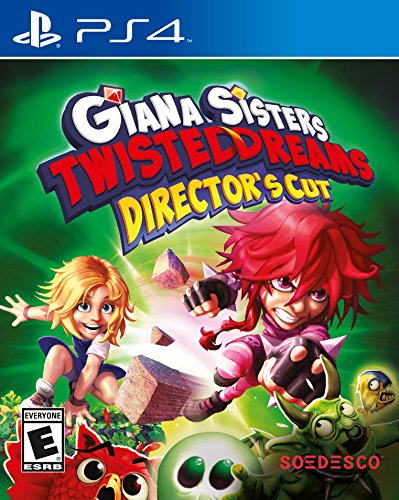 Rating: Everyone
Genre: Adventure
Overview
Giana's sister Maria has been kidnapped by a giant dragon. It is up to you to save her in this all new Director's Cut of Giana Sisters: Twisted Dream! As a teenager, Giana is learning all about her body's physical changes and the many emotions that accompany these transformations. Travel down difficult trails across two different dream worlds as you help Giana manipulate her dreams and search for Maria. Earn points by picking up crystals, discover important secrets and change between ?cute? and ?punk? forms to fight a wide variety of enemies and big bosses across thirty-three levels. This Director's Cut includes stunning HD 1080p environments and 3D morphing graphics, intuitive controls, smoother game play and Halloween and Christmas levels!
Advertisement

Game Release Dates is the best source to find out when does Giana Sisters Twisted Dream Directors Cut come out. Dates do change so check back often as the release approaches.
Privacy Policy
Copyright (c) 2020 www.gamereleasedates.net