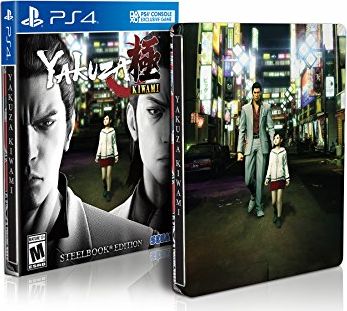 Rating: Mature
Genre: Role Playing
Overview
In 2005, a legend was born on the PlayStation 2 - the legend of Kazuma Kiryu, the Dragon of Dojima, in his video game debut with Yakuza. Now, 11 years after that release, a new generation of players will be able to experience the incomparable action and drama of the Yakuza series with the rebuilt-from-scratch HD remake exclusive to PlayStation 4, Yakuza Kiwami. "Kiwami" means Extreme, and the game takes that concept to heart. It's not an HD-remaster or up-rezzing of PS2-era textures. Yakuza Kiwami was recreated from the ground up exclusively for the PlayStation 4. That means every visual element was optimized for the 1080p/60fps environment, every line of the script was re-recorded by series actors and for the first time in the West, gamers will be able to hear the original Japanese language track. Then there's the game itself! The PS2-era brawling gameplay is refined for the current gen with Kazuma Kiryu fighting his way through the ranks of Yakuza, only to wind up protecting a youn
The products below contain affiliate links. We may receive a commission for purchases made through these links.
Advertisement

Game Release Dates is the best source to find out when does Yakuza Kiwami come out. Dates do change so check back often as the release approaches.
Privacy Policy
Copyright (c) 2021 www.gamereleasedates.net