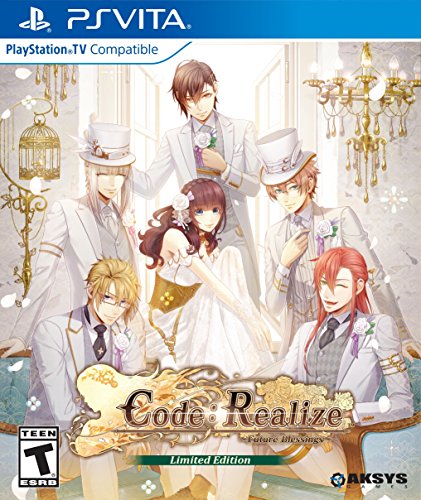 Rating: Teen
Genre: Adventure
Overview
Follow the main protagonist Cardia as she forms friendships and deeper relationships with a diverse cast of characters who are determined to help her throughout her trials and tribulations while being there to support her as she faces the lingering demons of her past. The story begins with the main character, Cardia, isolated and alone in a mansion on the outskirts of a 19th century steampunk version of London. A victim of a mysterious affliction that makes her blood a virulent poison and her touch instantly lethal, Cardia is shunned as a monster. Through a number of events both grand and seemingly insignificant, Cardia is pursued by the Royal Guard, kidnapped by the gentleman thief Arsene Lupin, and joined by a myriad of other handsome figures out of the best of western literature. With her new-found friends (and suitors) Cardia ventures out in the world to unravel the mysteries surrounding her very existence. Code: Realize "Bouquet of Rainbows" Limited Edition for North America! For
Advertisement

Game Release Dates is the best source to find out when does Code: Realize Bouquet of Rainbows Limited Edition come out. Dates do change so check back often as the release approaches.
Privacy Policy
Copyright (c) 2020 www.gamereleasedates.net