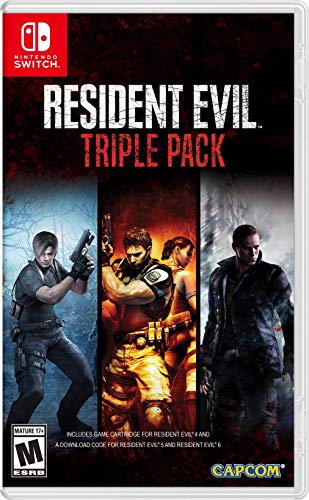 Rating: Mature
Genre: Action
Overview
Play three of the most action-packed games from the Resident Evil universe with Resident Evil 4, Resident Evil 5, and Resident Evil 6 available together in the Resident Evil Triple Pack on Nintendo Switch! Experience three intense campaigns Featuring fan favorite characters on the go or on the couch, and fight against some of the most horrifying enemies and creatures the series has to offer. This compilation includes all previously released map packs, costumes, and game modes. Reprise the role of Leon S. Kennedy in the critically-acclaimed Resident Evil 4, which changed survival horror with its third-person perspective and intense combat sequences. Battle dangerous threats across the globe alone or in co-operative play with friends in Resident Evil 5 and Resident Evil 6. Includes map packs, special costumes, plus the following game modes: - separate ways epilogue and mercenaries from Resident Evil 4 - Lost in nightmares, desperate escape and the mercenaries United from Resident Evil 5
The products below contain affiliate links. We may receive a commission for purchases made through these links.
Advertisement

Game Release Dates is the best source to find out when does Resident Evil Triple Pack come out. Dates do change so check back often as the release approaches.
Privacy Policy
Copyright (c) 2021 www.gamereleasedates.net