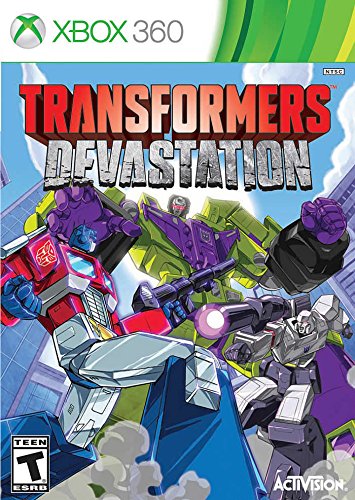 Rating: Teen
Genre: Action, Fighting
Overview
Transformers Devastation is based on a traditional hack-and-slash gameplay. This title revives the classic Transformers series that's all about fierce street fighting between robots and other foes. Players can choose to control powerful autobots including WHEELJACK, BUMBLEBEE and OPTIMUS PRIME. The robots are strong enough to crush cars and other obstacles that stand in the way in urban settings. There is also a combination system that makes it possible to develop signature finishing moves and other potent strikes and attacks. The rather primitive graphics in Transformers Devastation are reminiscent of the retro area when street fighting games were in their heyday. The superior audio in the game is highlighted by voices of original actors who were featured in the Transformers television show such as Dan Gilvezan.
The products below contain affiliate links. We may receive a commission for purchases made through these links.
Advertisement

Game Release Dates is the best source to find out when does Transformers Devastation come out. Dates do change so check back often as the release approaches.
Privacy Policy
Copyright (c) 2021 www.gamereleasedates.net