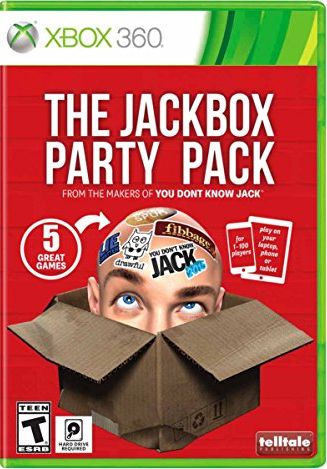 Rating: Teen
Genre: Trivia
Overview
You don't need game controllers for parties any longer with The Jackbox Party Pack. Depending on the game, you can play with up to 100 other players over their mobile devices! Access jackbox.tv through your console, use your room code and begin a night of fun that you will never forget! This party pack includes You Don't Know Jack 2015, Drawful, Fibbage XL, Word Spud and Lie Swatter. Play with up to four players in You Don't Know Jack 2015, between three and eight in Drawful, between two and eight in Fibbage XL, between two and eight with Word Spud and up to 100 players with Lie Swatter. Each game also offers new and unique content not found anywhere else!
Advertisement

Game Release Dates is the best source to find out when does The Jackbox Party Pack come out. Dates do change so check back often as the release approaches.
Privacy Policy
Copyright (c) 2020 www.gamereleasedates.net