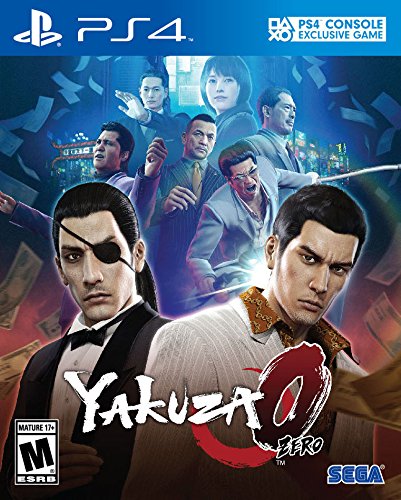 Rating: Mature
Genre: Role Playing
Overview
The glitz, glamour, and unbridled decadence of the 80s are back in Yakuza 0. A prequel to the long-running series set in Japan's criminal underworld, this entry introduces mainstay protagonist Kazuma Kiryu and series regular Goro Majima as they fight like hell through Tokyo and Osaka in their climb through the yakuza ranks. Along the way, players can interact with all the vices 1988's Japan had to offer: from discos and hostess clubs to classic SEGA arcades, there are tons of distractions to pursue in the richly detailed, neon-lit world.At its heart, Yakuza 0 is a classic 3D brawler, where players roaming the streets of Tokyo or Osaka will encounter all manners of goons, thugs, hoodlums, and lowlifes to beat up. Featuring an engaging combat system allowing players to switch between three different fighting styles instantaneously, Yakuza 0 gives players fluid, free-flowing fights that are easily learned and a joy to master. Take combat up a notch by using environmental objects such as
The products below contain affiliate links. We may receive a commission for purchases made through these links.
Advertisement

Game Release Dates is the best source to find out when does Yakuza 0 come out. Dates do change so check back often as the release approaches.
Privacy Policy
Copyright (c) 2022 www.gamereleasedates.net