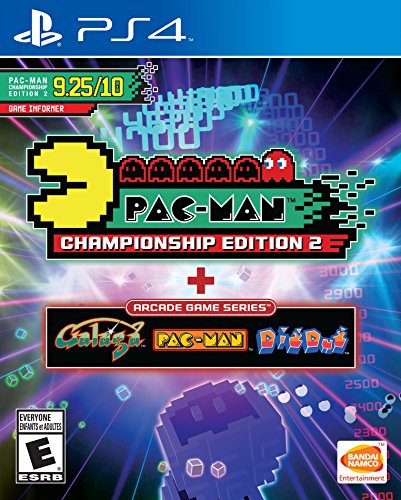 Rating: Everyone
Genre: Arcade
Overview
A new sequel in the highly acclaimed PAC-MAN Championship Edition series finally comes to next-generation consoles! Taking highlights from the past, PAC-MAN Championship Edition 2 takes the best aspects from Championship Edition and Championship Edition DX and evolves the game for the future! Featuring eye-popping 3D graphics and funky visuals, the latest version of the classic game takes chomping and chasing through mazes to a whole new level! Get on the train, a new PAC experience is here! First appearing in arcades in 1980, the masterpiece PAC-MAN finally comes to PS4 and Xbox One! Move PAC-MAN to eat all the Pac-Dots, while avoiding the ghosts, to advance to the next stage. Eat a Power Pellet to turn the tables on the ghosts and rack up a huge score! This latest port comes with scanline and sound settings, and the option to play with the Round 256 bug - perfect for PAC-MANiacs! Experience the masterpiece that charmed the planet! First appearing in arcades in 1981, the masterpiece
The products below contain affiliate links. We may receive a commission for purchases made through these links.
Advertisement

Game Release Dates is the best source to find out when does Pac-Man Championship Edition 2 + Arcade Game Series come out. Dates do change so check back often as the release approaches.
Privacy Policy
Copyright (c) 2022 www.gamereleasedates.net