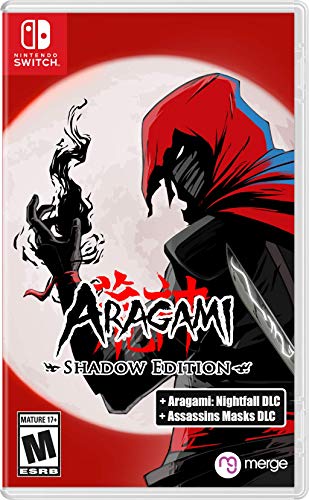 Rating: Mature
Genre: Strategy, Military
Overview
Aragami: Shadow Edition for Nintendo Switch Includes the original base game, the aragami nightfall expansion and all the available DLC. The game and expansion both support full two-player online co-op that is compatible Cross-Platform with PC and Xbox. You are aragami, a vengeful spirit with the power to control the shadows. You've been summoned by yamiko, a girl imprisoned in the city fortress of kyuryu. Embark on a dark journey full of blood and secrets to discover the truth about aragami. Infiltrate the occupied city of kyuryu with your supernatural powers and fight light with Shadow. Uncover a story about twin souls bound together by destiny that surpasses time and memory. In aragami: nightfall, Shadow assassins hyo and shinobu go after the mysterious Alchemist in One last mission to bring back a long lost companion.
The products below contain affiliate links. We may receive a commission for purchases made through these links.
Advertisement

Game Release Dates is the best source to find out when does Aragami: Shadow Edition come out. Dates do change so check back often as the release approaches.
Privacy Policy
Copyright (c) 2022 www.gamereleasedates.net