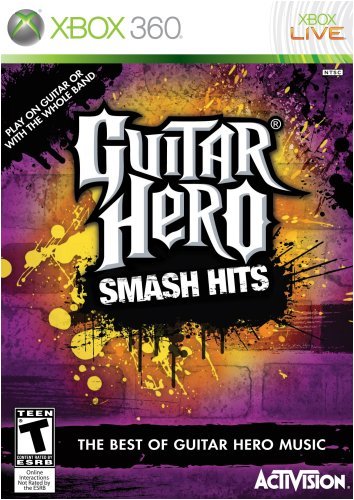 Rating: Teen
Genre: Musical
Overview
Let the inner musician in you come out with Guitar Hero Smash Hits. A track list of 48 songs are available to master in a variety of genres. Start out on easy to get a feel for songs that you may not be familiar with. Once you have played them a few times and scored well, consider moving up the difficulty level to earn even more points and unlock achievements. Some of the bands included in this game include Queen, Joan Jett, Twisted Sister and Rage Against The Machine. You can select to play on or offline. Consider using this game at parties and compete for a prize with the highest score and most perfect playing as the winner. Online play connects gamers with up to 8 others in competition. Up to 4 players can work together to play as a group.
The products below contain affiliate links. We may receive a commission for purchases made through these links.
Advertisement

Game Release Dates is the best source to find out when does Guitar Hero Smash Hits come out. Dates do change so check back often as the release approaches.
Privacy Policy
Copyright (c) 2021 www.gamereleasedates.net