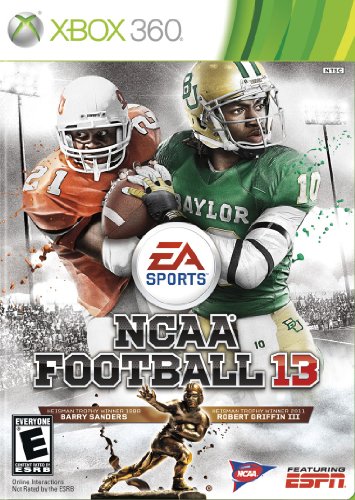 Rating: Everyone 10+
Genre: Sports
Overview
Electronic Arts' college football simulation series returns for its 2013 installment with a number of gameplay tweaks and features. The new "Road to Glory" mode puts players in the shoes of either a high school athlete or a rookie coach and follows them as they progress through their college career and attempt to perform well enough to make it to the NFL. Players are able to create their own high schools including names, school colors and types of stadium. Rule changes have also been made to reflect those adopted for the 2012-13 NCAA Division I season. Texas State, Texas-San Antonio and UMass have also been added as new playable teams.
The products below contain affiliate links. We may receive a commission for purchases made through these links.
Advertisement

Game Release Dates is the best source to find out when does NCAA Football 13 come out. Dates do change so check back often as the release approaches.
Privacy Policy
Copyright (c) 2021 www.gamereleasedates.net