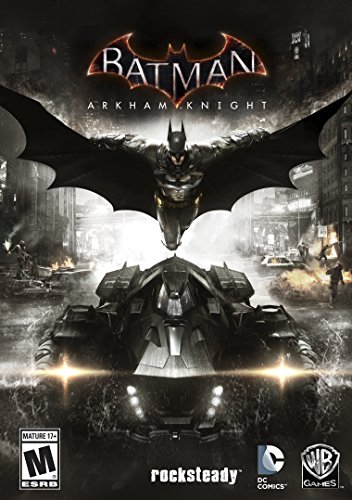 Rating: Mature
Genre: Action, Shooter
Overview
Batman: Arkham Knight is set in the traditional Gotham City setting, where Batman pursues the main Villain Scarecrow. This action adventure game is loaded with traditional themes of the iconic Batman character. A lot of weapons, gadgets and other features from previous Batman Arkman games make a comeback in the Batman: Arkham Knight edition. For example, players can enjoy the powers of the line launchers and grapple guns. Additionally, the classic Batomobile can be used to navigate the streets of Gotham City during missions. This signature vehicle has super abilities that include jumping, rapid acceleration and powerful smashing through obstacles. Batman: Arkham Knight has crisp three dimensional graphics that present a futuristic setting of Gotham City. High speed chases, high flying aerial attacks and powerful hand to hand combat define some of the realistic graphic simulations of this Batman game.
The products below contain affiliate links. We may receive a commission for purchases made through these links.
Advertisement

Game Release Dates is the best source to find out when does Batman: Arkham Knight come out. Dates do change so check back often as the release approaches.
Privacy Policy
Copyright (c) 2021 www.gamereleasedates.net