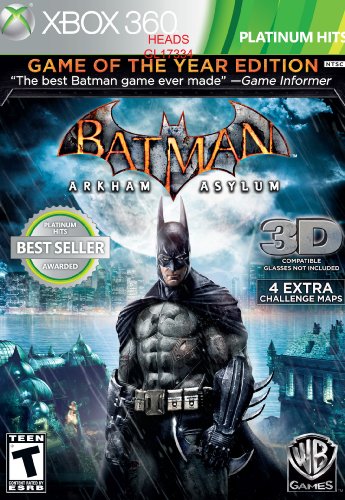 Rating: Teen
Genre: Action
Overview
Guide Batman through a series of trophy-snatching puzzles, vision-enhanced forensics and no-holds-barred brawling to bring a series of increasingly dangerous and maniacal criminals to justice within the prison break of Arkham Asylum. With a semi-linear adventure that crisscrosses back and forth over the entire island, Batman will have to fight, stalk and spy his way through everyone from the obscure Victor Zsasz all the way up to the notorious Joker. However, the conflict isn't entirely one-sided, as Batman has a generous set of tools to assist him in his vigilante business. Scale towers with grappling hooks only to glide down via an extended cape, trigger explosives to demolish terrain or hack into computer interfaces with a cryptographic sequencer. Once the main adventure is conquered, the Game of the Year edition also includes an especially wide load of challenge maps, defying you to beat your best score with a flawless series of combos.
The products below contain affiliate links. We may receive a commission for purchases made through these links.
Advertisement

Game Release Dates is the best source to find out when does Batman Arkham Asylum: Game of the Year Greatest Hits come out. Dates do change so check back often as the release approaches.
Privacy Policy
Copyright (c) 2021 www.gamereleasedates.net