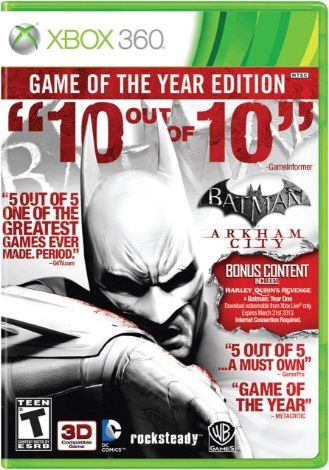 Rating: Teen
Genre: Action
Overview
Take flight as the infamous winged crusader in ?Batman: Arkham City Game of the Year Edition.? This special release extensively chronicles Bruce Wayne's battle with the franchise's nefarious villains. Devious masterminds run amok as a central district is transformed into a stronghold for the convicted thugs of the Batman universe. Every iconic enemy from the comic book is featured with crisp detail. The upgraded edition is equipped with a deranged exploration of Harley Quinn's Revenge. This chapter dramatically extends the plot with a demented look at the superhero's most lasciviously twisted nemesis. Other extra packs are included for Catwoman, Nightwing and Robin. The Dark Knight's stealthy tactics allow him to survive murky corridors, monstrous gangsters and murderous mental patients. The desolate chambers loom with imminent doom, but players can dismantle the enemy operations using Batman's quick-witted resourcefulness.
The products below contain affiliate links. We may receive a commission for purchases made through these links.
Advertisement

Game Release Dates is the best source to find out when does Batman: Arkham City Game of the Year Edition come out. Dates do change so check back often as the release approaches.
Privacy Policy
Copyright (c) 2021 www.gamereleasedates.net