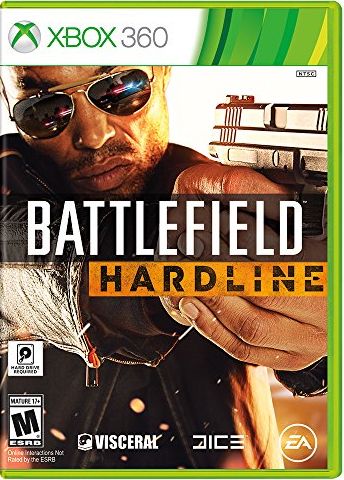 Rating: Mature
Genre: Action
Overview
Battlefield Hardline has a game play and story line inspired by a modern TV drama series. This title allows players to live out their wildest dreams regarding urban recklessness and violence. The adrenaline pumping action is full of car chases, heists, shootouts and much more in the middle of the streets or high above on skyscrapers and anywhere in between. Confrontations between savvy criminals and police forces define Battlefield Hardline. Players can enjoy different modes such as Rescue, Heist and Hotwire. The all new arsenal includes grapples, zip lines, sawed off shotguns and pistols. Cops are equipped with traditional crowd control weapons such as tear gas, semi-automatic rifles and shields. High speed vehicular mayhem includes sport bikes and traditional town cars. The main character Nick Mendoza, a SWAT team member, has his work cut out for him in Battlefield Hardline.
The products below contain affiliate links. We may receive a commission for purchases made through these links.
Advertisement

Game Release Dates is the best source to find out when does Battlefield Hardline come out. Dates do change so check back often as the release approaches.
Privacy Policy
Copyright (c) 2021 www.gamereleasedates.net