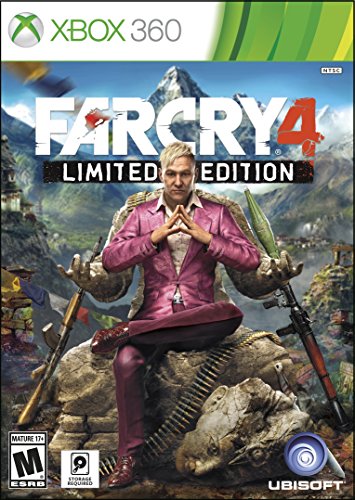 Rating: Mature
Genre: Action, Shooter
Overview
Far Cry 4 integrates a first person shooter design into an action packed story line set in the fictional nation of Kyrat, which is based on the Himalayas. The main character Ajay Ghale returns to his home country and gets caught up in a violent civil war. He takes on a leading role in resisting the oppressive leadership run by the King known as Pagan Min. Far Cry 4 has superb three dimensional graphics that accurately simulate the stunning landscape of the Himalayan mountains. Players can expect to encounter wildlife such as honey badgers, snow leopards and black eagles. However, the human foes pose a much greater challenge for Ajay Ghale. The open world design of Far Cry 4 is enhanced by an innovative cooperative mode. The improved arsenal includes powerful harpoons as well as traditional handheld tools like knives.
The products below contain affiliate links. We may receive a commission for purchases made through these links.
Advertisement

Game Release Dates is the best source to find out when does Far Cry 4 come out. Dates do change so check back often as the release approaches.
Privacy Policy
Copyright (c) 2022 www.gamereleasedates.net